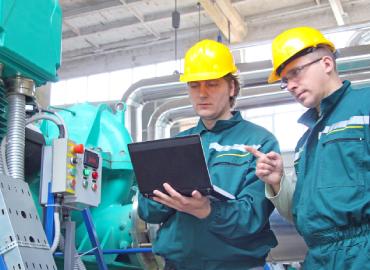 In many manufacturing environments, there is a need to change the manufacturing process several times during a work period. For example, bakeries use the same machinery to make cake batter as used to make frosting, film processors must change film from one type of packaging to another during the production process. These process changes take valuable time away from production and if not done correctly, can result in considerable loss when the process is started. In fact, a prominent film producer admitted that a single missed step in the process change protocol cost the company nearly $100,000 to remediate.

The possibility exists today to automate the change process with accuracy and speed. The normal process requires employees to follow a step-by-step protocol to manually reset machines to the new task. This string of commands and actions often is followed by different staff on different shifts. The goal is guaranteed repeatability from one shift to the next and from one person to the next. But in reality, this doesn't happen without the use of technology-based assistance.

Using the advantages of an RFID solution like the Factorytalk from Rockwell Automation and the abilities of Allen Bradley's programmable logic controller (PLC), manufacturers now can automate the change process. With a simple command sent to the human machine interface (HMI), the system is triggered to start the resets necessary to implement the new process, leaving no room for human error.

For the last several years, manufacturers have been using RFID technology such as the RF IDeas Proximity and contactless card readers to authorize personnel on the manufacturing line. Each badge contains a unique string of numbers that identifies and authenticates the user, be it operator, engineer, to preform approved tasks. A new and exciting development in manufacturing is the idea of using the same principle, only to identify a process that needs to take place, rather than an individual.

The Future of Process Change Automation

RF IDeas currently is working with automation engineers at the Rockwell distributors to identify process change control applications using cards that identify each process and allow the settings for the new process to be switched over automatically. Once accomplished, the process is repeatable and can offer at least a common starting point for each new process with less chance of error. While the benefits of this innovative approach are nearly immeasurable, there undoubtedly will be a substantial cost savings in setup time as well as a prevention of cost due to faulty process.

To learn more, visit our Rockwell Knowledge Base.