Getting Productivity Off the Ground with RF Technology 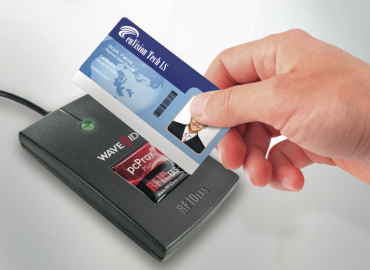 Airplanes fly. And if you like what you’re doing, so does time on the job. Chickens, however, do not. But whether you’re in the business of manufacturing aircraft, measuring employee attendance or processing poultry, RFID cards and proximity readers can help productivity, efficiency and cost-effectiveness take flight.

A large North American airplane manufacturer, for example, took off in the direction of pcProx® Enroll proximity readers when a quality team noticed a lot of employee ID numbers were being kicked out as “bad” data, skewing its parts production analysis. The cause? Worn-out magnetic stripe employee badges were being misread, which led to a 15 percent error rate. When new RF badges and readers were installed, the company identified several inefficient activities that were causing production line problems.

Businesses can quickly find themselves grounded, as well, by problems with payroll and employee attendance records, as a North American tire manufacturer discovered when it tried to replace its old punch-clock system with PC-based log-in stations incorporating RFID readers. But it was difficult finding a reader that easily attached to PCs, and buying replacement ID cards from the existing vendor turned out to be cost-prohibitive.

The plant’s entire time-clock badge system was upgraded with ISOProx II cards from HID™ and pcProx readers from RF IDeas. Now, the simple wave of a badge identifies employees, displays a photo and sends attendance data directly to the payroll system. The upshot? Faster sign-in, more accurate recording of hours and tighter control of payroll.

There are times, as well, when businesses quite literally need a hand when it comes to authorizing employee access to restricted areas. A large North American poultry processor came to that conclusion when workers required by OSHA regulations to wear protective clothing – including not-so-easily-manageable gloves – were forced to make two or three attempts at typing in passwords to do their jobs. After several tries, the system would lock them out and the help desk found itself constantly resetting passwords – an unworkable situation that cost resources and productivity.

Now, employees at the processing plant just wave their ID badges to gain fast and easy entry to machinery. OSHA compliance was guaranteed and – as it did with both the aircraft manufacturer and the tire company – productivity took wing.