Aspen Snowmass Gets Guests on Slopes Faster with pcProx® 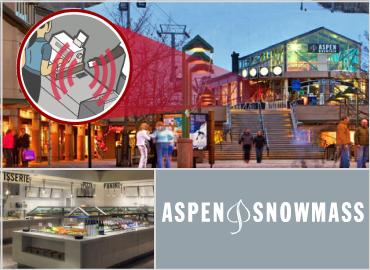 
Aspen Snowmass is a world class destination resort, owned and operated by the Aspen Skiing Company. Located in Pitkin County in western Colorado, the resort’s four skiing/snowboarding areas are located on adjacent mountains in the vicinity of the towns of Aspen and Snowmass Village.

CHALLENGE: Expand RFID-enabled guest ski pass to restaurants and retail stores
In 2008, Aspen Snowmass installed large RFID-enabled gates at each mountain access point, allowing guests wearing an RFID ski pass to ski through the gates while RFID readers collected the ID number and sent it to a database tied to the guest’s profile. The profile was immediately displayed on a weatherproof computer monitored by a staff member stationed at the lift, providing the guest’s photo, name, age, and product purchased.

The new, streamlined process reduced the time guests waited in line to reach the top of the mountain and start their day on the slopes. The system worked so well, the IT department decided to extend usage of the RFID ski passes to allow guests to use them at the resort’s restaurants.

“We wanted to give our guests the convenience of locking their wallets and credit cards in their guest room and using the ski pass for more than just mountain access,” says Rob Blanchard, Director of IT Support Services, Aspen Skiing Company.

The idea seemed perfect except for one giant obstacle. The existing readers were around $450 each, which put the project over budget. In addition, the readers were serial devices that would not work with the MICROS® POS terminals located in the restaurants.

SOLUTION: Cost effective RF IDeas readers mounted on MICROS POS registers
Although RFID was the right approach, the level of technical sophistication provided by the ski-pass RFID readers was overkill for the resort’s restaurants and Blanchard and his team began researching less expensive options. They found the perfect solution with RF IDeas pcProx card readers.

“The RF IDeas readers were compatible with the specs of the existing RFID media that Aspen Snowmass already had in place but the price would be significantly less than the readers used in the resort,” says Blanchard.

Wearing their lift pass, guests could purchase meals at any of the resort’s restaurants and on the way out, would simply either tap the pass on the pcProx reader mounted near the cash register or keep it on their jacket and stand next to the reader.

Aspen Snowmass initially purchased about 30 pcProx readers to test the concept. Today, they have an installed base of over 100 pcProx 13.56 MHz (RDR-7581AKU) readers and 80 pcProx Plus (RDR-80581AKU) readers.

“RF IDeas has been a good asset to our company,” says Blanchard. “The readers have been a great addition and we were definitely happy to find it. In fact, we’ve had a number of ski resorts get in touch with us and ask about them and we’re happy to oblige.”

The key to success is partnering with the best
Solid technology, unsurpassed quality, and partnering with the best integrators in the industry allow RF IDeas to provide solutions that add quantifiable value to its customers. iTech Automation, an expert in automating data entry and tracking assets using barcode and RFID technology, is one of those partners and has worked closely with Aspen Snow Mass to help them expand their use of RFID technology. “RF IDeas has a comprehensive and reliable line of RFID readers and offers solid technical support,” says Paul Lemieux, iTech Automation. “They are a great partner to involve when building RFID solutions.”